The Eisenhower Method
Of Time Management

The Eisenhower method is a principle you can use to improve the way you prioritize your tasks.

This time management technique evaluates each of your given tasks accordingly.

All of your tasks are analyzed and grouped together by using “quadrants” of four sections:

2. Not Urgent but Important – 2nd Priority

3. Urgent but Not Important – 3rd Priority

4. Not Urgent and Not Important – 4th Priority

Imagine a square with four sections where each section is for each of the priorities above. 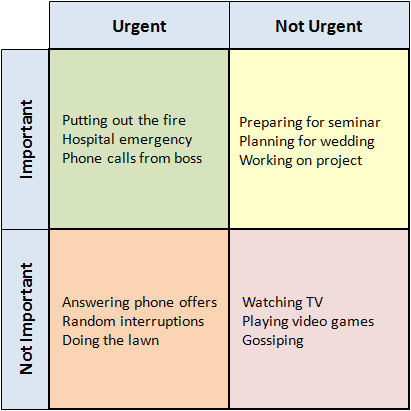 These are the four divisions of tasks you should understand for the Eisenhower method.

Here’s a brief explanation on how each level of priorities is treated:

The Eisenhower method is used by the US President Dwight D. Eisenhower during his governance and shows the way on how he performed his tasks as he handled great responsibilities.

There is a quote by him that is very relevant to his personal time management strategies:

President Eisenhower was a five-star general in the United States Army during World War II. He served as the Supreme Commander of the Allied Forces in Europe.

He had the responsibility for supervising and planning the invasion of North Africa and the successful invasion of Germany and France.

Later he became the first supreme commander of NATO before he became president.

Using His Method is Simple

You may look at it as something used by a highly accomplished person that makes it look complicated however the principle is easy to apply for your personal time management benefit.

You may have a to-do list of tasks or a planner where your activities are laid down. You’ll just have to categorize them according to "level of priority."

These are the most important ones and you have to quickly take action on them. These are unexpected situations and you usually won’t have any time to plan for it.

Not Urgent but Important – 2nd Priority

These tasks are not immediate but they are significant in your life. You’ll usually have the time to plan for them and work things out in careful procedure.

Urgent but Not Important – 3rd Priority

These are things and events that can happen instantly and may need your immediate attention and action but you can ignore them for later or delegate them to someone who can do it.

Not Urgent and Not Important – 4th Priority

The last of the four priorities in the Eisenhower method is the least important and can be "done away."

These are usually "timewasters" that can take your energies away from accomplishing something productive.

The Eisenhower method can be your principle of personal time management strategies.

You just have to segregate your tasks accordingly and follow the method sincerely and you’ll see the results with the way your time is used and the accomplishments you make.